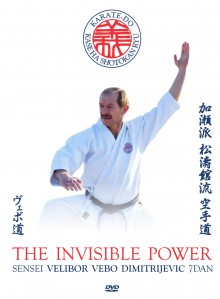 DVD THE INVISIBLE POWER - KASE HA SHOTOKAN RYU KARATE DO, Velibor Dimitrijevic, 7ş Dan (Pack 2 DVDs), English subtitles, 95 min. + another DVD with the documentary film THE WAY OF THE SAMURAI (45 min.) produced by Serbian TV and winner of the price "Best Idea Shanghai Film Festival 2013". Contents include: Vebodo - Kase Ha - Ki - Tanden - Ibuki - Mushin & Zanshin - Stance - Blocks - Punches - Kicks - Kata - Bonus (25 min.) Sensei Kase explaining the secrets of his approach in Athens 1998. Sensei Velibor Dimitrijevic, 7ş Dan is member of the Shihan-kai and one of the leading instructors of the Kase Ha Shotokan Ryu Karate-Do Academy (KSKA), which preserves the ideas, teaching and legacy of Taiji Kase Sensei. Since the age of 17 he was a close follower of Kase Sensei and later became one of his closest assistants. A renowned European Champion, Vebo sensei took part in 3 World and 11 European championships winning 15 medals. In former Yugoslavia he was booth Kata and Kumite champion winning 22 medals, as well as numerous medals in his native Serbia. Striving for the essence of the martial art philosophy, he managed to decode the Budo approach toward practice, developing a teaching method that promotes authentic ideas and concept of Kase Ha style, which is the development of breathing power, rooting and ground power, as well as visualization and mind control. Now (2014) for the first time in 45 years, he offers an insight into his training system incorporating technical and physical aspects of practice with abdominal breathing and mind control, thus leading to a better understanding and application of the Ki energy phenomenon. Extra: All DVDs will be personally dedicated by Vebo Sensei!

Other products of same category::