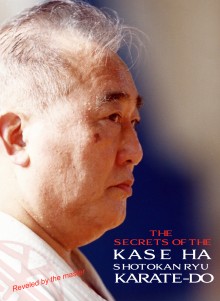 DVD THE SECRETS OF THE KASE HA SHOTOKAN RYU KARATE-DO, revealed by master KASE, Taiji, 10th Dan and explained through English subtitles, by Velibor Dimitrijevic, 7. Dan, 141 min., English subtitles.
A "must have" for serious Shotokan practitioners! First time published footage from the courses held in Greece and Serbia from 1992 until 2001, including about 8 minutes introduction by Velibor Dimitrijevic sensei about Kase sensei’s life. Kase sensei was fascinated with Japanese Budo philosophy and samurai’s tradition, particularly with Miyamoto Musashi, and here he speaks about ideas and concepts that he based his practice on. He was greatly influenced by Yoshitaka Funakoshi, who managed to change many aspect of the traditional Shotokan developed by his father Gichin. Kase sensei speaks about Ten-Chi-Jin concept and the Ki development as the ultimate ideas in Yoshitaka’s approach. He went even further making radical changes in his approach to Shotokan creating distinguished style that bares his seal. Besides many technical changes and new techniques that he developed the main difference lies in the way how and where the power is coming from, and that is the flow of Ki energy. Kase sensei speaks and demonstrates rooting and ground resistance power, explains Fudo dachi stance and the entire spectrum of his closed and open hand techniques, as well as Gyaku Uraken application in Sen-no sen and Go-no-sen strategy, etc. Finally, he explains why Ibuki breathing is by far the most important aspect which generates phenomenal body power. Sensei Shirai said once that Kase sensei was enigma even for his Japanese contemoraries. After watching this DVD I am sure you will understand why he said that!